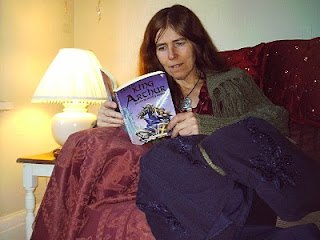 As well as writing books, it may surprise you to know my author also reads them – and, fortunately for all the other authors in the world, she reads a lot more than she writes. This is not because she likes reading more than writing. It’s time. Since she takes an average of nine months to write a book and only nine days to read one, by the Muse’s calculations she gets through about three and a third books every month, or 40 books a year… am I right? (Remember I have to do this calculation in base 4 because I’ve only got four hooves – sometimes it’s tough being a unicorn!) Anyway, at the end of each month I’ll take a peek at my author’s bedside table and tell you what she reads when she thinks nobody’s looking…

1. ALIEN INFLUENCES – Kristine Kathryn Rusch
I happen to know my author has read this book at least twice, which means it’s comfort reading. (She needs some comfort, because it’s snowing outside and she’s been recovering from flu.) It’s a science fiction novel that tells the story of a group of children who live on a planet where the aliens are creatures with long, graceful limbs called Dancers. Desperate to grow up so they can escape their planet, the children try out a Dancer ritual that turns young Dancers into adults… the only problem being that this involves removing their friends’ hands, hearts and lungs to make way for new organs. Tragically, of course, this kills their friends and frightens the adults, who think they have been “influenced” by the Dancers. The children are separated, tried for murder, and scattered across the Galaxy. The book follows John - the leader – as he sets out to find his surviving friends, a task he completes only after he discovers the secret of the Dancer jars filled with strange silver light.

2. ON WRITING – Stephen King
Yes, my author is still trying to discover Stephen King’s secret! This is an entertaining and honest book about life as a famous author, along with some thoughts on writing and where stories come from. It won’t teach you how to write, but it will give you some tips on where to find stories and characters. If you’re a fan of Stephen King, you also get the story of his life so far and a suitably horrific account of how it almost ended. By the way, did you know Stephen King’s muse lives in the basement and smokes cigars…? So unhealthy!

3. TALES OF KING ARTHUR – retold by Felicity Brooks
An illustrated collection of short stories based on the famous legend of King Arthur and his Knights of the Round Table, retold for younger readers. My author’s excuse is that she’s writing her own Arthurian series… oops, not supposed to tell you that yet! Anyway, she liked the cover.

(...and a third) THE TIBETAN ART OF SERENITY – Christopher Hansard
In the Muse’s opinion, my author needs this book more than any of the others! It has words of wisdom based on Buddhist teachings about success, failure, money, love, life, the universe and everything. It also contains meditations to calm you down when you’re stressed. It’s the sort of book you dip into, and I wouldn’t be at all surprised if it’s still there next month.

Have you read any of these books?
Let the Muse know what you’ve been reading this month!