Showing posts from January, 2013
Show All

Little did I imagine when I started this blog series that, more than a year later, I would be adding another post! But even as I was writing my earlier posts in the series, eager to let you glimpse the background work that goes on behind the scenes of creating and publishing book, the paper versions of “I am the Great Horse” were slowly going out of print. Eventually no copies were left in the warehouse, and since my publishers decided not to reprint, the rights reverted to me. Bombarded by (well, sprinkled by) emails from people seeking copies of the book, I began work on the ebook edition in 2012. I quickly ran up against an important publishing decision: did I make the ebook look like a children’s book, since the original hardcover and paperback editions were published on a children’s list? Regular readers of this blog will be aware I already have some pictures of the horse characters, which I tried inserting into the text as illustrations. But I soon took them out again
Read more 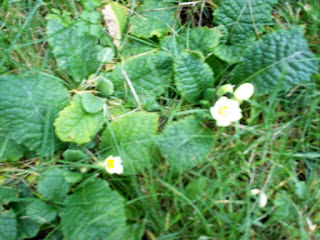 I know, I know... the unicorn has been such a lazy blogger lately! I've had my horn deep into the final draft of the fourth and final Pendragon Legacy book, Grail of Stars, so that's my excuse (while Katherine, of course, has been celebrating Christmas and New Year in the usual way... i.e. slaving over the keys of her computer, typing in all the things I tell her to write, inbetween oversized meals and fiendishly difficult games of Upwords with the family... imagine Scrabble in 3D?) So just to prove my horn still has some magic left, here's a photo taken on New Year's Day, January 1st 2013 in the unicorn's garden: New Year primrose! And here's a more seasonal photo of Katherine's dizzy cat playing with her Christmas present - a catnip mouse. (Can't see what all the fuss is about, personally... do they have such a thing as unicorn-nip...?) Catnip for Christmas *~*~*~*~*  Happy New Year to all!  *~*~*~*~*
Read more
More posts