This fantasy trilogy follows three generations of young Singers as they join forces with the half-human creatures of their world to battle the evil Khizpriest and the power of dark crystal. In 2000, Book 1 Song Quest won the first ever Branford Boase Award (awarded annually to the best debut novel for young readers by a UK author). 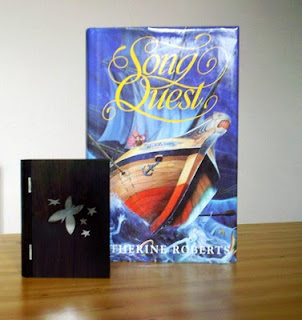 The three books are best read in order.

Several posts on this blog mention the Echorium Sequence. Here is a selection:

What's your Song of Power? - there are five Echorium Songs used by my blue-haired Singers to control people... and it turns out song magic is not just fantasy!

Would you eat a mermaid? - A guest post over at the fun 'But What Are They Eating' blog.

Five Rules of Writing - Robert Heinlein's fifth rule might seem redundant in today's indie-publishing world, but I used it to find my first publisher for Song Quest!