Showing posts from September, 2012
Show All

My author says I've got to squeeze in another post this month, or she won't let me pick out my own name on Monday. But I've been busy galloping around the countryside looking for a new home for us (you wouldn't believe how difficult it is to find a house with a unicorn stable) so I'm almost out of glitter. That means you'll have to make do with this video of Katherine (filmed in her bathroom, in case you're wondering - the sea horses you can see dangling over her left shoulder are closely related to unicorns). She thinks she's found Excalibur... but I'm not so sure. WATCH VIDEO (Be careful near the end, by the way, or you might find yourself desperately seeking a bookshop... sorry, should have told you that before you watched it!) If you fancy a free book, there's still two days left to name the unicorn for a chance to win signed copies of Sword of Light  and the new one Lance of Truth , published Monday... when I shall hopefully HAV
Read more

Judging a book by its cover 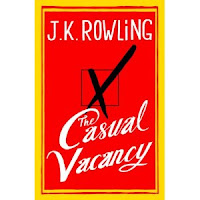 Covers can be worrying for authors, because they are the first thing your readers will see of your book. A brilliant story with a boring cover by an unknown author might never be picked off the shelf – or, more likely – never be put on the shelf in the first place, since booksellers are also influenced strongly by covers as they don’t have time to read all the books they stock. In a few rare cases, the author’s name might be enough to take the place of an interesting design. Would you pick up this book if it was written by Joe Bloggs? This is an example of a book where a fussy cover might actually hide the thing that will really sell it - i.e. the author's name. Muse disclaimer: We understand this book is for adults and has nothing to do with boy wizards . Katherine's publisher has taken a more literal approach using scenes from the books. This is a bit more risky than a cover with a big black cross on it, since readers are quick to point out things that don’t match the
Read more 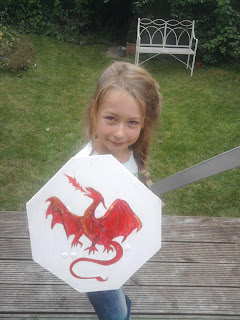 One of the lovely things about writing books for younger readers is seeing someone dressed up as one of your characters. (If you want the truth, my author is still a big kid herself and can sometimes to be found at science fiction and fantasy conventions where there's an excuse to dress up as Queen Guinevere… but more of that later!) Today I wanted to show you this great snap of Cecily inspired by the heroine of my new series, Rhianna Pendragon: Cecily Pendragon (photo used by kind permission of Cecily's mum) You’ll note the Pendragon shield, complete with red dragon, based on King Arthur’s shield from "Sword of Light", which is rather battered since the king was using it in battle when the dark knight Mordred killed him. After the battle, Merlin takes Arthur's body through the enchanted mists to Avalon, where he gives the shield to Rhianna, who has been growing up in hiding with Lord Avallach's fairy people. But a shield isn't much use on its own,
Read more
More posts