Showing posts from August, 2012
Show All

This is to prove I wasn't telling unicorn porkies about those videos my author has been busy making... it's the very first "vlog" (a human word not in my unicorn dictionary) on my new YouTube channel 'ReclusiveMuse', and we hope to bring you a few more soon. This one is short and sweet. The clip was taken in Katherine's office (spare room) using the video setting on a digital camera. She's sitting down, and the red thing behind her right shoulder is an old curtain she bought at a car boot sale. It's covering up the edge of a radiator, because there isn't a big enough bit of blank wall in her office to avoid things like that. The curtain has a design of little elephants (which are distantly related to unicorns), and usually it doubles as a throw over the chair she's sitting on. The pictures of the characters used in the video are by the talented Scott Altmann, who also did the cover art for the Pendragon books. His blog is HERE Hope
Read more

August 25, 2012
The Muse has been rather a lazy blogger this August, as you've probably noticed. Only ONE post this month so far, and that one was about the Olympic Games, which doesn't even have an event for unicorns. (At least not yet, though when I have a proper name, I plan to enter the show jumping in disguise and show all those posh horses a thing or two...) But though I haven't been writing many actual blog-words, I've been playing around in the enchanted blog-woods and made a few small changes. Design. I'm experimenting with a beautiful bright blog background the talented Alzrith sent me - this one is a drawing called "Creatures" inspired by my books. Of course now you're probably all looking at the background instead of reading my words, but that's fine with me! Words and pictures are simply two different paths into the enchanted mists. You can check out more of Alzrith's lovely colourful work at  http://alzrith.deviantart.com/ Amazon Store . I
Read more

Spirit of the Olympics 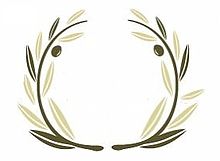 Wild olive: Olympic crown Now that all the excitement of the Olympic Games is over, the Muse has been musing on the difference between the ancient and modern events. In ancient Greece, the Games were part of a religious festival held to celebrate their gods. The greatest honour a young runner could gain was that of carrying the sacred torch in the closing ceremony to light the fire at the altar of Zeus Olympia, whose statue was one of the Seven Wonders of the Ancient World. Winning athletes were crowned with wild olive and given a red ribbon to wear around their arm, and soon the sporting events (originally not the most important part of the festival) became as famous in the ancient world as the statue of the god, prompting Aristophanes to write: Why, Zeus is poor, and I will clearly prove it to you. In the Olympic games, which he founded, and to which he convokes the whole of Greece every four years, why does he only crown the victorious athletes with wild olive? If he were rich
Read more
More posts