Showing posts from October, 2013
Show All

A Treat for Halloween 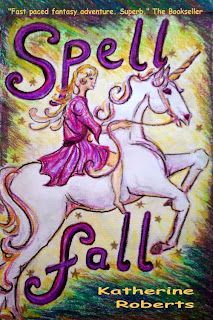 Trick or treat? If you're anything like me, you'd probably prefer a treat! So, for this weekend only, you can read my Halloween fantasy thriller SPELLFALL on your Kindle for under £1 (or under $1 or under 1 euro , depending on where you live). Natalie saw the first spell in the supermarket car park. It was floating in a puddle near the recycling bins, glimmering bronze and green in the October drizzle. At first she thought it was a leaf, though as she drew closer it began to look more like a crumpled sweet wrapper – a very interesting sweet wrapper. Pick me up, it seemed to say, glittering intriguingly. Surely I’m worth a closer look?    She shook her head and hurried past. She was wet and cold and had more things to worry about than picking up someone else’s litter. But the trap had been baited by one who knew a lot more about spells than she did. Before she knew what she was doing, she’d put down her chinking carrier bags and gone back for it. As her hand
Read more 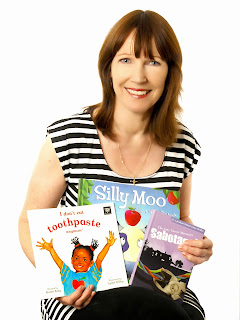 On this autumnal morning, the unicorn welcomes Karen King, whose muse might warm you up a bit... Karen King with some of her books. 1. Who (or what) is your muse? Karen: My muse is a soft cuddly baby giraffe. This is a picture of him. He’s a ‘hottie’ actually, which means he has a microwavable bag inside him that can be heated up to keep my hands warm. He sits on my desk and watches me write. Sometimes I tell him my ideas and he always listens very carefully. I also take him on school visits with me. "Shall I warm your typing fingers for you?" 2. When did you first meet? Karen: We met a few years ago, a friend of mine gave him me as a present. Only then I thought he was a baby cow! Now I call him 'Giraffe-Cow'. 3. Does your muse appear in any of your books and/or artwork? Karen: No but I did blog about the time I took him on a school visit when I still thought he was a cow. The children soon put me right! Read the full post on Karen's blog .
Read more 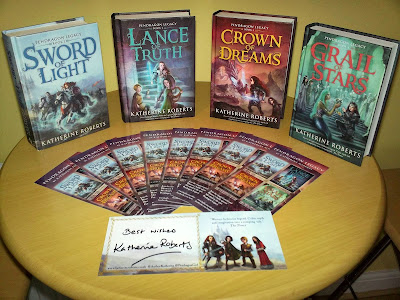 I just wanted to share this lovely photo of all four Pendragon Legacy books in shimmery hardcover format, plus the gorgeous bookmarks my publisher Templar have produced for the series. Here they all are displayed on my own little Round Table in my kitchen: So if you come to see me talk about these books before they run out, you should be able to pick up a bookmark too! (and if you don't manage to escape quickly enough, I might even sign it for you on the back... see bottom of picture). I wonder how many other readers have the full hardcover set? All four titles are now available in hardcover, paperback and ebook (except Grail of Stars paperback, which publishes 1st Feb 2014). SPECIAL OFFER: Save £6 until October 31st! Sword of Light Kindle ebook only 99p
Read more 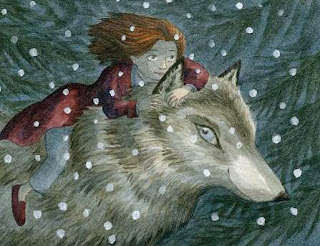 This Monday, the unicorn welcomes Emma Barnes - and a rather scary muse! Who (or what) is your muse? Emma: A wise and witty talking wolf! At least she was for my latest book,'Wolfie'. Emma Barnes When did you first meet? Emma: A few years ago when I was lucky enough to spend some time in the warm sunshine of California...and my imagination strangely started to follow a magical wolf into the winter woods and snow. Does your muse appear in any of your books and/or artwork? Emma: Yes – she’s in my book 'Wolfie', where her full name is Fang-That-Bites-Sharp-In-The-Forest. If you won the lottery and had complete artistic freedom, what would you write/create? Emma: I’ve written an epic fantasy, which I haven’t published, simply because it was what I wanted to write. To be honest, it’s hard to predict the market, so why not write what you believe in? Before you go, does your muse have a message for the Unicorn? F-T-B-S-I-T-F: Greetings
Read more 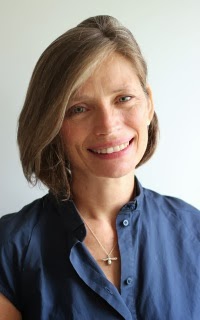 This week, the unicorn welcomes author Lydia Syson, who has a traditional muse as well as subsidiary muses for her books...  Lydia Syson Who (or what) is your muse? Lydia: I suppose for some time my muse has been one of the actual nine muses: Clio, the muse of history. But the invitation to contribute to Muse Mondays and think about the idea of a muse rather harder than I ever have before, makes me realise that her real importance is in introducing me to other, subsidiary muses, which vary from book to book. For ‘That Burning Summer’ she took me to a most inspiring place: Romney Marsh, in Kent. Clio, the Muse of History When did you first meet? Lydia: Clio and I got to know each other late in life.   I didn’t answer her call until I was in my 30s, and I almost completely failed to listen to her at school. As for Romney Marsh, I encountered it so long ago that I feel it has always been in my head, though it was years before I actually went there and disco
Read more 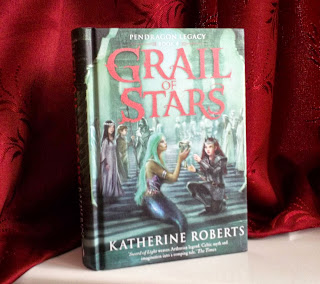 It's here! The final book of my Pendragon Legacy series about King Arthur's daughter is now in my hands, bringing Rhianna's two year quest - and mine - to an end. Out in hardcover with a shimmery cover finish that catches the light, the book has lovely endpapers with maps printed on them, like this one of the Grail Castle:    I've dedicated this book to all my readers who are on a quest... is that you? "For everyone on a Quest" That little row of numbers at the bottom of the lefthand page mean this is a first printing of the first UK edition - so if yours looks the same, and you can persuade me to sign it for you (I don't need very much persuading) then your book might even be valuable one day! To celebrate its publication, here's a short video to explain what Rhianna's quest is all about: Join the quest today! ~*~ The Pendragon Legacy series is published by Templar
Read more 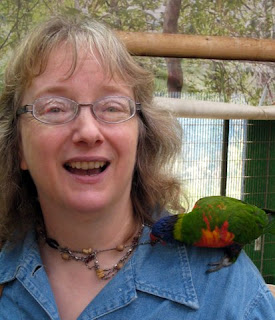 Today, children's author Joan Lennon makes a welcome return visit to this blog... Joan Lennon and friend (don't tell the cat...!) Who or what is your muse? Joan: I've already had the pleasure of hanging out with the unicorn on an earlier Muse Monday which was about ferrets. But nobody said you can't have more than one muse! And all the while I've been writing the Victorian detective series, The Slightly Jones Mysteries ,* my old cat Katie has curled up nearby and slept in an inspirational fashion. It's true! A quiet room and a quiet cat help the words to flow. * The Case of the London Dragonfish, The Case of the Glasgow Ghoul, The Case of the Cambridge Mummy, and just out, The Case of the Hidden City (see below). A quiet cat helps the words flow... When did you first meet? Joan: Katie (the cat) is 17 now, so in human terms we met 84 years ago, when she was a kitten. Does your muse appear in any of your books and/or artwork? Joan:
Read more 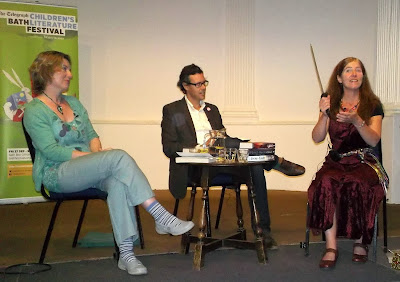 Last weekend, I was discussing Arthurian legends with the lovely Julia Golding at the Bath Children's Literature Festival... Julia Golding, Jeff Norton, and me (with Excalibur) at Bath Festival Julia has written a series based on the Arthurian legends too Young Knights   - and it was interesting to see the different ways we brought the old legends into our books. My Pendragon Legacy series continues the story the day after after King Arthur is killed in battle, with his secret daughter Rhianna Pendragon riding out of Avalon to fight her cousin Mordred for the throne of Camelot. Julia's series takes characters from different times back to Avalon, then sends them into the modern world to form a new Round Table. At the event, after I'd done a bit of sword waving, and Julia had shown her beautiful cloth version of the Round Table, our chair Jeff Norton asked us a rather difficult question: " Why do you think the Arthurian legends are still relevant today? "
Read more
More posts