Showing posts from April, 2021
Show All

The Horse Who Would Be Emperor - SPECIAL LAUNCH PRICE ONLY 99p 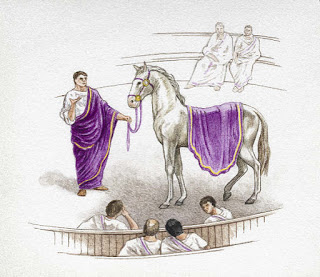 Following in the hoof prints of my Alexander the Great novel  I am the Great Horse , I'm delighted to announce the publication of a brand new novel telling the story of another famous horse from history... meet Roman challenger, Incitatus the Swift! Incitatus - the horse who would be Emperor Emperor Caligula's favourite racehorse eats gold for breakfast, attends the Senate, and has 18 slaves to look after him. When Caligula names Incitatus heir to the throne, the horse's stylist Livia and young charioteer Marcus are caught up in a plot to assassinate the mad emperor and restore the Republic to Rome. Livia is sentenced to death fighting tigers, while Marcus must risk life and limb in the Circus Maximus. Only Incitatus can save them... but how can a horse be Emperor of Rome? Find out in this action-packed adventure set in 1st century Rome, on special offer for Kindle until 1st May. The Horse Who Would Be Emperor * SPECIAL LAUNCH OFFER * Kindle edition only 99p / 99c paperback
Read more
More posts