Showing posts from June, 2012
Show All

June 25, 2012
Have you heard of the Summer Reading Challenge ? It takes place in libraries over the summer holidays, and the challenge is to read six or more books before you go back to school... or, if you're really keen, ALL the books! But the whole point is that this challenge is meant to be fun. So you don't have to read any book you don't want to read, and if you borrow a book but don't finish it, then that's ok too - just bring it back to the library and try another one. The great thing about books is that they are all different, so there's bound to be something on the list you'll enjoy. And if you happen to enjoy sword fights and magic set in the world of King Arthur, I'm delighted to tell you that one of the titles on the "older" list is the first book of my new Pendragon Legacy series Sword of Light . Here's a short video clip of me talking about it. ( Muse: I used Katherine's little digital camera to make this, so it's probably my f
Read more

MUSE MONDAY: Celia "this is not forgiveness" Rees 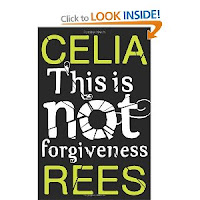 Celia Rees’ latest novel This is not Forgiveness came with a clever press release claiming “this is not Celia Rees…” which worried the unicorn a little bit, because Celia is known and loved for her spooky stories and atmospheric historical novels such as Witch Child . But fans of her earlier work need not worry. You can still sense Celia's trademark spookiness lying just beneath the surface, with passing reference to tarot cards and ouija boards to keep even a unicorn happy. Told in accessible first person style by her three narrators – innocent teen Jamie, his damaged elder brother Rob fresh back from Afghanistan, and the beautiful, slightly witchy girl Caro who gets too close to them both – there unfolds an unsettling story of modern teens that you just know is going to get dark and dangerous before the end. Today, the Muse is delighted to welcome Celia “this is not forgiveness” Rees to talk about why she felt compelled to write this book… CELIA REES   I was delighted and
Read more

Sword of Light goes to Windsor 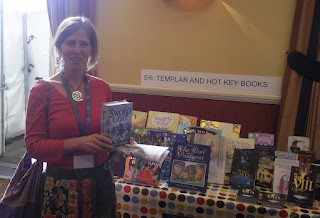 It’s been an exciting weekend for my author, who is just back from the joint School Libraries Group /Youth Libraries Group /School Library Association Lighting the Future conference held at the beautiful Beaumont Estate in Old Windsor. Katherine with her book "Sword of Light" at the Templar stand The weekend began on Friday with a long train ride and magical timing by Katherine’s editor Helen Boyle, who arrived at the local station on a totally different train just in time to share a taxi to the conference. The taxi driver told us that Windsor was the site of the last ever duel to be held in England – most appropriate, since the knights in the Pendragon Legacy series are always challenging each other to duels! And Helen discovered a recent dig at Windsor Castle claims it might have been Arthur’s legendary court of Camelot… again very appropriate. Templar commissioning editor Helen Boyle (right) with PR girl Jessica. That evening Templar MD Amanda Wood officially
Read more

STORY OF THE MONTH - EMPIRE OF THE HARE 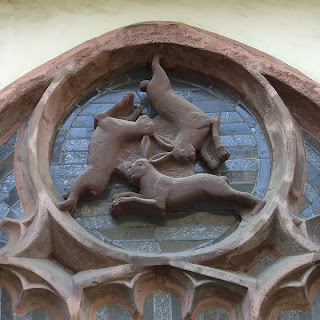 The trouble started with Father’s will. He divided the wealth of the Iceni and gave a mere half to Emperor Nero. The other half he left to his Queen, with the understanding she should rule in his place when the spirits finally claimed him.      It might have been the way things were done in my grandparents’ day, but it certainly wasn’t the way our conquerors ruled. Classicianus, the Prefect’s tax collector, had been most anxious I should understand our position upon Father’s death. “Submit as Roman women do,” he advised. “Then Nero will allow you to stay in your home. The only thing you’ll lose is your titles – a small thing, surely, compared to what he has the power to take from you, should you cause any trouble.”      I knew it would be no use talking to Mother or my sister. So while the fortress slept beneath the moon goddess Serapha’s silver eye, I crept to Father’s bedside, fell to my knees and begged him to reconsider.      He tried to lift the plait that hung heavy as a bronz
Read more
More posts