Sword of Light goes to Windsor


The weekend began on Friday with a long train ride and magical timing by Katherine’s editor Helen Boyle, who arrived at the local station on a totally different train just in time to share a taxi to the conference. The taxi driver told us that Windsor was the site of the last ever duel to be held in England – most appropriate, since the knights in the Pendragon Legacy series are always challenging each other to duels! And Helen discovered a recent dig at Windsor Castle claims it might have been Arthur’s legendary court of Camelot… again very appropriate.


That evening Templar MD Amanda Wood officially opened the exhibition with a speech, and illustrator Simon Bartram and I got to shake hands with the mayor and mayoress of Windsor. I was too busy shaking hands to take pictures, but I wore my party dress underneath a lot of warm layers to combat the 'cool summer breeze' (Muse: howling gale) that blew in through the doors of the exhibition marquee. Well, it's an English summer, isn't it?


After the drinks reception, the barbeque was thankfully moved inside because of the wind, and we all enjoyed a much warmer story-telling evening in the hall by the entertaining John Agard among others.


A celebration cake followed the delicious food, with a rather large candle (more like a roman candle!) and Chris Riddell’s illustration for the conference done in blue icing… 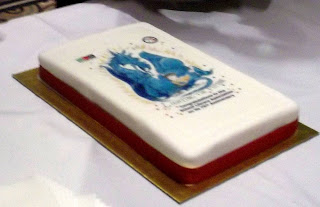 Possibly the earliest session ever, and yet a group of dedicated librarians got out of bed to attend. Katherine hopes the harp music was not too loud for so early in the morning, and that her lookalike Excalibur (plastic version for getting past metal detectors at school gates and airports) worked the required magic.


After her talk, Katherine had a proper breakfast with Helen and Templar PR Jayne Roscoe, while the librarians rushed off to other sessions. When Helen and Jayne went back to “woman” the Templar stand, she met a fellow SF/Fantasy fan who, it turned out, had a real sword collection… though thankfully he’d left his swords at home, so she didn’t have to pretend to be Rhianna and test out the plastic Excalibur in a duel at dawn.

Then a bit more wandering around the exhibition… where we found Catnip’s re-issue of Song Quest at the Bounce stand (that's Walker’s distinctive candle in the background on the neighbouring stall... another form of light!).


There followed some book signing at a table shared with charming author Aidan Chambers (thanks for sharing, Aidan!), where she finally got to meet the lovely Bookette Becky Scott, who did a long blog interview when "Sword of Light" came out earlier this year. 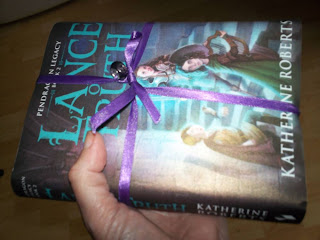 Templar had just produced these lovely proof copies of Book 2 “Lance of Truth”, and those who woke up in time to catch the breakfast session got a copy complete with shimmery cover proof, all done up with a matching purple ribbon and magical Arthurian jewel. (We're just hoping that nobody got the jewel from the Crown of Dreams that came out of the shadow-realm of Annwn... if you have that one, please treat with utmost care because it can be known to summon dragons.)

A final nose around the bookstall, a quick lunch in the bar, and then back to Reading to catch the train home.

This proved an eventful journey since, after crawling to a standstill somewhere in the countryside between Reading and Taunton, the ticket collector announced: “We’re sorry for the delay… this is due to children playing chicken on the line.” (Muse tip: Kids, next time you’re bored DO NOT PLAY CHICKEN WITH TRAINS! Borrow some great books from your local library instead, then you’re much more likely to grow up to be a train driver. I am serious.)

Katherine is now safely back home writing the remaining Pendragon Legacy books, so keep your eyes open for the rest of the series as they publish in hardcover and paperback:

Lance of Truth: October 2012
Crown of Dreams: Spring 2013
Grail of Stars: October 2013
A big thank you to all the organisers, who wore very well-deserved big rosettes at the conference. It was lovely to be among all those “knights in shining armour” of children’s reading – and if you didn’t see me, the unicorn, at Katherine's side then that’s because I’m a bit shy in a crowd. (But I bet you spotted me somewhere among all those lovely books…)

Unknown said…
Hi Katherine,
It was so great to meet you at last. I was very excited and I fear slightly nonsensical (so my apologies). I'm looking forward to reading The Lance of Truth. I'm surprised by the publishing dates. Six months between? Your muse must be working overtime.
Becky
11 June 2012 at 17:04

Katherine Roberts said…
Thank you Alzrith! Hmmm, maybe my writing is a mixture of all three of those authors...?

Katherine Roberts said…
Camelot is outside time and space... that's the beauty of the legend! Almost everywhere I go in Britain to do an author talk, I can start with "Do you know this is the legendary site of King Arthur's Camelot...?" And possibly a few places in America, too?!
13 June 2012 at 18:33