October 14, 2013
This week, the unicorn welcomes author Lydia Syson, who has a traditional muse as well as subsidiary muses for her books...

Lydia: I suppose for some time my muse has been one of the actual nine muses: Clio, the muse of history. But the invitation to contribute to Muse Mondays and think about the idea of a muse rather harder than I ever have before, makes me realise that her real importance is in introducing me to other, subsidiary muses, which vary from book to book. For ‘That Burning Summer’ she took me to a most inspiring place: Romney Marsh, in Kent.

When did you first meet?

Lydia: Clio and I got to know each other late in life.  I didn’t answer her call until I was in my 30s, and I almost completely failed to listen to her at school. As for Romney Marsh, I encountered it so long ago that I feel it has always been in my head, though it was years before I actually went there and discovered it was a real place rather than some sort of fairy land.  We first met in the poems and stories of Rudyard Kipling, which my father used to read to me, where the Marsh is magical and mysterious – a place of lights appearing and vanishing, spires sitting beside churches, the ‘sea setting above the land’ and ‘dykes’ and ‘water-lets’ which twist the roads about ‘as ravelly as witch-yarn on the spindles’.

One of my favourite series of children’s books was set in a barely disguised version of Romney Marsh: Monica Edwards, the author, had grown up there, and many of the events she writes about really did take place in one form or another – such as the terrible lifeboat disaster in ‘Storm Ahead’. Finally, the Marsh and I met in person, in my late twenties, thanks to my partner, and I began to visit regularly.  As soon as our children were old enough, we started to explore this bleakly beautiful part of the world together, taking meandering bicycle rides along the back lanes, listening to the noisy Hungarian frogs, looking at lambs, stopping at pubs and churches, and wondering about the Battle of Britain pilots still buried in the Marsh where they vanished.

Does your muse appear in any of your books and/or artwork?

Lydia: It’s the setting for nearly all of ‘That Burning Summer’, a book which has three main human characters, and Romney Marsh.  I was fascinated by what it must have been like there in the summer of 1940, when you could see occupied France from the shore and hear the guns, when dogfights raged over your head and you were absolutely on the front line.  Most people were convinced that invasion was inevitable.

I’ve also tried to infuse the novel with a sense of the longer, deeper history of the place.  If you go walking on Romney Marsh – never easy, as Kipling points out, because of the waterways (or ‘sewers’ as they’re known) which constantly turn and disorientate you, it’s hard not to be aware that you’re treading on reclaimed land, and that ships once sailed where your feet are now.

If you won the lottery and had complete artistic freedom, what would you write/create?

Lydia: I’d still want to write novels, but I’d be able to spread my wings and go and do all the research I have to do now in libraries and on the internet in person.  I’d go to Timbuktu, and to various Pacific islands, and all sorts of other places – wherever the muse took me!

Before you go, does your muse have a message for the Unicorn?

Romney Marsh: Come and explore me – I think you’d feel at home.

Thank you, I'll be there the next moonlit night... and afterwards can I join your author in Timbuktu? 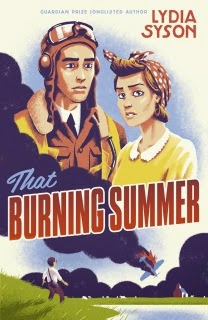 When invasion threatens, you have to grow up quickly.

Sixteen-year-old Peggy has been putting on a brave face since the fall of France, not least for the sake of her anxiety-prone younger brother Ernest. But now the enemy is overhead, and the rules are changing all the time. It’s getting harder and harder to ignore the rumble of guns, the rumours of spies and the malicious gossip in town. When a young Polish pilot, Henryk, crash-lands on the Marsh, Peggy quickly finds she’s taken on more than she bargained for.

Everything changes in one extraordinary burning summer.

Sue Purkiss said…
I really enjoyed those Monica Edwards books, too. I look forward to reading this book - I very much enjoyed your last one, set in Spain.
14 October 2013 at 08:34

Lydia Syson said…
Thank you very much! I loved the Devil's Punchbowl ones too, and was lucky enough as a child to stay there quite regularly (with my mother's godmother) and meet Monica Edwards, who kindly lent me all the ones she'd written I didn't own! She had the most beautiful Abyssinian cats.
14 October 2013 at 12:34

Sue Purkiss said…
How wonderful! I never owned any, I borrowed them all from the children's library. They were in the boys'section, where most of the best books seemed to be. To this day I've never been to Romney Marsh - so it was great to read about it in your post.
14 October 2013 at 17:10

Katherine Roberts said…
How lovely to meet Monica Edwards - and her cats sound wonderful!
15 October 2013 at 18:25