Riddles with a sphinx in the snow 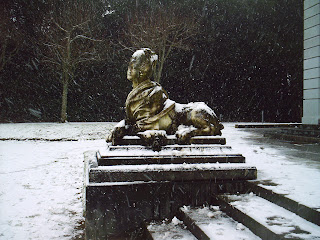 My author’s so deep into website building at the moment instead of creating new stories, I’ve got nothing to do. But I’m not a lazy unicorn. Rather than sit around twiddling my golden hooves, I went for a trot in the park at the weekend and saw a sphinx – yes, that sort of thing happens to unicorns all the time! You might think you see just a boring old park with dogs chasing balls and squirrels running up trees, but then you trot around a corner and see a creature you’re not expecting. Magic is always just around corner. You only have to look for it.

Actually there are four sphinxes in this park. Most people think they’re just statues, but I know better. In fact my author’s already put a sphinx into one of her books (“The Great Pyramid Robbery”, if you’re interested), though that one’s ghostly and male. This is a lady sphinx, as you can see. She reclines on a plinth with her great paws folded, contemplating the distant sea over the roofs of the town. She’s a bit dirty and covered in leaves and snow, but she’s not cold because she wears a tasselled cloth. She also wears earrings, and her curly mane is piled on top of her head, so she was obviously quite posh once.

Well, as everybody knows, besides being half lion (or half lioness), sphinxes love riddles. If you can't guess them, they won't let you pass. When she spied me coming, she gave me this one:

Out of the snow
Bravely we grow,
First of the year
Like frozen tears.

Katherine Langrish said…
Mmmm! Nice one. I think I can guess it, though. Let's see...