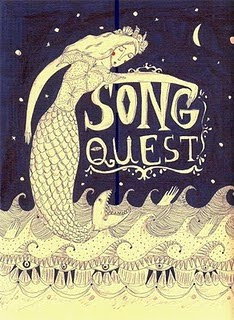 This week, my author had the honour of judging the Bookette’s cover contest to find a new look for “Song Quest”. So I am handing over my glittery Muse-horn to Katherine, who has this to say about the entries…

Authors don’t often get the chance to choose their covers, so it was a real treat to pick the winner of this fabulous competition, though a difficult task to choose just one out of such a varied and talented entry. Professional publishers spend a lot of time, energy and money to find the right “look” for a book, yet even they don’t always get it right. Sometimes a brilliant cover looks great on its own but can get lost in a shop, either because it looks too much like all the other books, or looks too different so people don’t recognize the type of book and walk past assuming they won’t like it.

I think a good cover should:
1) Make a reader want to pick up the book (most important!).
2) Say something about the story.
3) If part of a series, have the same “look” as the other covers in the series.

A very beautiful cover can sometimes tempt me to buy a book because it will look nice on my shelf, even if I’m not sure about the story. Colours are important, too, for attracting the eye. A lot of books aimed at girls these days seem to have pink sparkly ones, but Song Quest is not just a book for girls so I’m pleased none of these entries were pink!

Also, covers that appeal to adult/YA readers often don’t work as well for younger readers, so the age level of the story needs to be taken into account, too. Song Quest was originally published for readers aged 9+, which I think can be especially tricky because it falls between child and adult. Too “young” a design could put off older readers, yet too “adult” a design might not inspire younger readers.

Three of the entries stood out for me, and here’s what I thought of them:

ENTRY 1 by Sammee
Sammee’s design is professional and atmospheric, though I felt it looked a bit too much like the original American cover to win, since the aim of this contest was to find a fresh new look. Interestingly, this was the only entry to mention that the book is part of the Echorium Sequence, but since the competition rules didn’t actually specify all the lettering (title, author, series name, etc.) had to be in place, I did not penalise the others for leaving them out.

ENTRY 2 by Daria
Daria sent in several designs with a very distinctive style. I loved all the artwork, but felt that the mermaid gave the best feel for Song Quest. This design would look very striking done in dark blue and silver, and if the waves at the bottom were removed there would be plenty of space for author name etc. to be added. It would also be quite easy to give the other two books in the Echorium Sequence the same distinctive look by using their particular half creatures in place of the mermaid – a centaur for Crystal Mask, a quetzal for Dark Quetzal – perhaps using different colours (green and silver for Crystal Mask, crimson and silver for Dark Quetzal?) With the stars in the background, the covers would glitter. This is a child-friendly design without feeling too “young”, so should appeal to the 9+ readership as well as older fantasy/mermaid lovers, so it’s the one I like best for a children’s edition of the book.

ENTRY 3 by Darlyn
Darlyn’s entry stood out for its clean, professional, modern look. The title and author name and the quote from the review are all beautifully positioned as part of the design. The reflected ghostly image in the eye is clever, and although my Singers don’t actually use musical instruments in the book – she looks as if she is holding a violin? – this could easily be tweaked to agree with the story. It was not quite so obvious, however, how the other two Echorium books could be given the same cover “look”, and I also think this one has quite an adult feel. So although initially drawn to this design as an adult reader, in the end I had to consider the story level and the fact the book is part of a series in making my final decision. If “Song Quest” ever had an adult edition, though, this is the one I’d choose!

Clearly, the above three entries all have different strengths, and in the end choosing a winner must come down to personal preference. Although Entry 3 is more of a finished product, I think Entry 2 would make the best basis for a fresh, distinctive, reader friendly design that could be extended to the other two books in the series.

So the winner is… Entry 2, Daria’s mermaid!

With a special mention for Darlyn’s Entry 3.

Congratulations and a big thank you to everyone who entered. I am in awe of your talents. My agent is in discussion with publishers at the moment about possibly bringing this book back into print, so it seems this campaign is already having some effect.

Naturally the Muse loves the winning cover since mermaids are almost as magical as unicorns. You can see all the entries on the Bookette’s blog. Which one is your favourite?

Daria Hlazatova said…
Dear Katherine, thank you! I've just sent you an email (I found the address on your website) with the other two drawings!
14 May 2010 at 13:04

Damian Harvey said…
These are great Katherine. Perhaps you should do a similar competition for your next book - before the publishers do there cover, then offer the best ones up as suggestions.
17 May 2010 at 08:47