Great Horse 1 – “Where do you get your ideas from?”

This is a question every author gets asked eventually. But it’s never an easy one to answer. We don’t just sit down one day in front of a blank page or computer screen, pluck an idea out of the air and start writing… at least it never works like that for me!

I don’t lack ideas for stories. They come to me all the time, at the rate of three or four a day if my mind is not too busy working on something else. They spring out of everything. Books I’m reading, newspaper articles, magazines, radio and TV, billboards in town, overheard conversations, peculiar things I see while out shopping or travelling, occasionally a dream. I write them all down – just a sentence or two – in a hardback notebook. It’s a bit messy. That’s a picture of it above. (The pieces of newspaper sticking out the sides are newspaper clippings that caught my eye but I haven’t got around to scribbling in the book yet.)

At this stage my ideas are just seeds awaiting the right conditions to grow into stories, and I don’t think I’m alone in having such a lot of them. All the authors I know seem to have plenty of ideas of their own, which is why we always smile when someone tries to give us one of theirs. We’re not too bothered, either, that somebody might steal them. After all, the seedling ideas are out there lying around for everyone to pick up should they so wish. I happen to believe that if you gave the same idea to 100 different writers and sent them away to work in isolation, you’d get 100 different books. The real problem is not finding the ideas believe me! It’s the growing of them into stories that’s the hard part.

One of these ideas, scribbled down in the middle of writing my Seven Fabulous Wonders series, says simply: “Bucephalus – the story of Alexander the Great, as told through the eyes of his horse.” Underneath it I added (at a slightly later stage): “Black Beauty meets Gladiator”, because I’d just seen the film Gladiator and enjoyed the swords and sandals, battles and gore, though of course that one was Set in Roman times a few hundred years after Alexander the Great… history was never my strong point at school! As you can see, it is sandwiched between some other unrelated ideas I had at the time. (The green line I drew across much later, after the book had been written, to remind me I’d used it.) 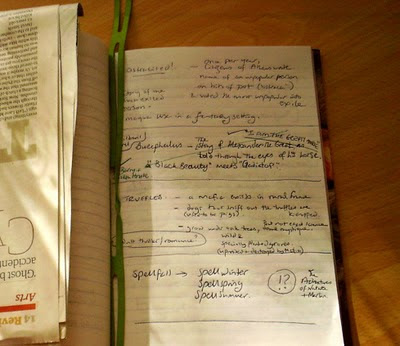 Most of the ideas in my notebook will never be developed further – there just isn’t enough time in a human lifespan to nurture them all. And not all of them will grow into books. Some would make better short stories. Others might combine to produce something bigger. A rare few demand to be entire series. So the real question for me is not “Where do your ideas come from?” but rather “Why did you choose to write that one next?”

It’s an interesting question for a professional author, because choosing which book to write next is not as simple as choosing the one you’d really love to write. Quite often it comes down to a contract – money, in other words, which is firmly tied to what the market or your publisher wants at the time. But with this particular book I was lucky. I had the dream contract from my publisher Chicken House. It said simply “new novel”. Out of the 13 books I’ve published so far, only two have given me such complete freedom from market forces – my first novel Song Quest (which I wrote while I had another income to live off), and this one with its advance already in the bank. So it’s a good example of the muse having a rare creative freedom.

So why choose Alexander? As explained, I was doing a fair amount of research into the ancient world for my Seven Wonders series, and he kept springing up, razing whole cities and demanding I give him a bit more attention, so that’s where the seed came from. And the horse? As some of you will already know, horses are in my blood. As a child, I helped out at the local riding stables in exchange for free rides. Later, I worked as a racehorse groom, and at the time of scribbling down my idea about Alexander I was exercising up to three spirited racehorses each morning. It was a short leap of the imagination to see one of them as the young king's brave horse Bucephalas and the others in the string as those of his friends - kicking and squealing matches included!

As for why that one next, the twin towers had recently come down, prompting America to invade Iraq and later begin the un-winnable war in Afghanistan. This almost exactly mirrored what Alexander did when he invaded Persia and went on to wage his own un-winnable war in Afghanistan (Muse: the only country that defeated Alexander the Great… did you humans learn nothing?) I’m not a political sort of author – usually I prefer to hide such things in a safe fantasy setting – but the war was in the news, it was in the ether, prompting many books and novels from many different writers. So it was the right time for a book about Alexander. Yes, I know it sounds crazy, but I do think the American invasion of Iraq was the trigger that made this one particular idea whisper in my ear: write me NOW.

So I gave in. I took a break from my Seven Wonders series and headed off down the library to find my first book about Alexander the Great. (Today I’d probably Google him, but this was 2003 before the heady days of the world wide web... or at least before it had reached the Welsh border country, where I lived at the time.) As soon as I read the famous story of how the 12-year-old Prince Alexander tamed the unrideable black stallion with a head like an ox, and discovered that the only other person who could ride the wild horse was a lowly groom, I was hooked…

Next: choosing a viewpoint.

Katherine Langrish said…
Wow. Katherine, this is so interesting: I'm going to tell everyone to read this set of posts, because it's exactly the way books are born, the many diverse threads from the past, the present, the personal,the political - all coming mysteriously together and becoming a new creation.
5 August 2010 at 14:54

Penny Dolan said…
Really glad you are doing this, Katherine. I am a Great Horse was a book I very much enjoyed reading, and will look forward to hearing the in-depth account of its making. Fantastic idea!
5 August 2010 at 15:49

Nick Green said…
I'm impressed that your notebook is so legible! It is definitely thrilling to see those first sketched thoughts of books that have now become real. It's like glimpsing a secret of how it's done... only we'll never really know.
6 August 2010 at 15:48

adele said…
This is going to be a brilliant series, and I'm so glad you chose to focus on Great Horse which is a favourite of mine.
9 August 2010 at 14:29

Unknown said…
I am catching up on all your posts. This is fascinating. I am just dabbling with a new idea that I want to explore. I've got a strong feeling this is going to help me. Love the notebook too.
16 September 2010 at 11:44