October 13, 2010
At last we come to the title. You might be wondering why it took so long to get to this point, but titles can be trickier than you think. Sometimes they come straight away and everyone loves them – like the first book of my Seven Fabulous Wonders series, which I knew would be called “The Great Pyramid Robbery” before I wrote a single word. But more often the published title comes after much discussion with the editor, and the author’s original ideas can usually be improved upon.

This might seem overly fussy, but the title is probably the most important word(s) in your book, because title and cover image taken together must inspire a potential reader to pick it up in the first place. They may then turn it over to read the back cover “blurb”, or leaf through the pages to get a feel for the story, but if your book is shelved the traditional way in a bookshop then chances are people won’t even see the cover image, only the spine with title and author’s name. So unless you are a celebrity who can guarantee sales on name alone, the title has to work very hard indeed. (Muse: this is why you sometimes see authors or their agents sneakily turning their own books face-out on the shelves so people can see the cover as well!)

Up until this point, in early 2005, my book was still known as “Bucephalas”. But my editors soon dropped this title because of being difficult to spell… Bucephalas? Bucephalus?… as well as being difficult to pronounce. Bookshop assistants would struggle with it, they decided. They also felt that younger (and many older!) readers might not realize this was the name of Alexander the Great’s horse. I squirmed a bit, because I’d become quite attached to my working title after living with it for so long, and had difficulty thinking of my book as being called anything else. But I had to admit my editors were right, because I’d often spelt it wrong myself to begin with - Bucephalus was the breed of horse; Bucephalas was the horse’s name - so out it went. With no obvious alternative, Chicken House began to call the book “The Amazing Horse Story Without A Name”.

And so it remained throughout the editing process. While I tried to get “Bucephalas” out of my head and think of something better, my editors tossed ideas back and forth between them, and since this book was to have a simultaneous American edition my US publisher Scholastic got involved, too. We wanted a title that would suggest this was a story about Alexander the Great being told by his horse… yet at the same time one that did not sound too historical, in case people thought this was a history book about Alexander and were put off by that. I don’t know how my editors went about their brainstorming. I have an image of them curled up before a roaring fire in Chicken House’s office with coffee and doughnuts having fabulously creative sessions, but at home alone in my study I had to rely on other methods.

Normally I just scribble down ideas until something jumps out at me. But in this case nothing did, so I decided to try a word collage. 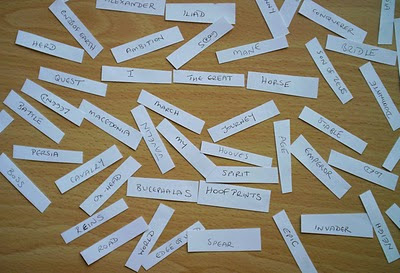 I took a piece of white card and wrote down all the words I could think of that suggested the book to me, or occurred many times in the text… such as HORSE, ALEXANDER, GALLOP, EMPIRE, PERSIA, WAR, ILIAD, SQUEAL... Then I cut these up into single words and laid them all out on a table. To find a title, I tried random picks with my eyes shut, as well as looking at the table sideways and grabbing a few that appealed as I passed it on my way to make cups of tea. I left the cards lying there for several days and mixed them around from time to time to freshen them up a bit, adding new words as I thought of them. This threw up some interesting combinations, which I wrote down on a list and emailed to my editors. They must have been doing similar things, perhaps with doughnuts, because they came back with their own list of brilliant ideas I hadn’t even thought of.

Here are a few of my personal favourites:
THE ALEXANDER YEARS
BUCEPHALAS THE GREAT (couldn’t quite give him up!)
KING AMONG HORSES
THE HORSE WHO MADE HIMSELF HUGE
ALEXANDRIAD
THUNDER OF HOOVES
THE GREAT ALEXANDRIAN HORSE STORY
A HORSE FOR A HERO
EMPIRE OF THE HORSE
WHO DARES RIDE ME
ALEXANDER, CHARM AND I

There were many others and different combinations of these, but one that kept springing up in all our lists was the fairly simple "Great Horse". Indeed, the book almost ended up being called this, except Barry Cunningham at Chicken House had the bright idea of putting I AM in front of it to make "I am the Great Horse", suggesting that the story was being told by a horse and not a human. (Muse: you can see it is almost there in the middle of Katherine’s word collage). The Americans favoured "I am the Dark Horse" at this stage, and sent us a jacket rough showing how this would work: 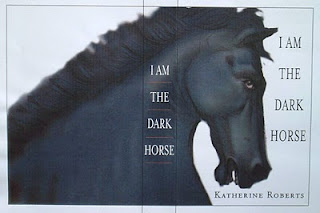 But aside from the fact it looked lovely on their design, we didn’t think “dark” really described Bucephalas’ character. (Muse: Maybe we were we wrong… what say you, American readers of this blog?)

And so we arrived at the final title you see today. It took about two months to find, and has been the trickiest title of all my books so far. I think it works very well with the fabulous horse’s head cover. The only thing I wish we could have added is a strap line on the front mentioning Alexander the Great, because without it the book looks like a standard horse story until you turn it over to read the blurb – though perhaps this would have put off more readers than it attracted?

Of course, the book could have been published in America with a different title, which happens more often than you might think. And when books are translated into other languages, the title often doesn’t translate very well and so gets changed for their market – sometimes without the author even realizing, if they don’t speak that particular language. So far “I am the Great Horse” has only been translated into Greek, and I believe the Greek title is the same as the English one… but I’ll leave that up to my translator Anna Vasileiadi-Dardalis to tell you in her exciting interview, coming up at the end of this month.

Next: Maps – a fascinating insight into the artwork of the book’s illustrator Brian Sanders.

Katherine Langrish said…
Fascinating post - how much work and trial and error goes into what seems in the end the inevitable title!
14 October 2010 at 12:31

Katherine Roberts said…
Kath - Interesting that you think it is the "inevitable title" because it took a long time to feel right for me, but I like it now.

Kathryn - if I'm really struggling, I give my book/story a working title until it's finished, and then brainstorm a better one at the end. Titles sometimes get changed before publication, anyway, so perhaps it's just as well not to fall too much in love with a particular one?
15 October 2010 at 14:55

Mary Hoffman said…
It does seem EXACTLY the right title to me. But I agree the title can be the hardest bit. I always knew `The Falconer's Knot" would be that book's title, but it' called "The Colours of the Devil" in German!
15 October 2010 at 15:49

Katherine Roberts said…
Mary - How strange! Colours of the Devil? I've read your book, and "The Falconer's Knot" seems just the right title to me, but maybe it gets lost in translation?

I think the German titles of some of my Wonders books got changed. I actually like their title better for the second book "The Babylon Daragon" (I think!), and wish I'd called it that for the English version!
18 October 2010 at 12:14

Unknown said…
Ooh I like Thunder of Hooves! But I still think I Am The Great Horse is the perfect title. I love these features so much.
28 October 2010 at 11:49