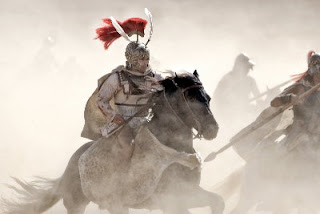 The final post in this series must go to fan Jaguar Jedi, who has created this fabulous book trailer on YouTube to tell Bucephalas’ story:

Along with other horse footage, this trailer uses promotional clips from Oliver Stone’s film “Alexander”, which came out at the end of 2004, just after I had delivered the manuscript of "I am the Great Horse" to my publisher. Already a fan, I drove 20 miles to see it on the big screen. I was eager to experience Bucephalas’ battles close-up, but also a bit anxious in case I had got something glaringly wrong. In the event, I needn’t have worried. Although the film concentrates more on the human characters than the horses, everything seemed just right, especially Alexander’s stormy character.

I was fascinated by how the film cuts back and forth through his life in the way of a literary type of novel, whereas my book tells the story in linear form that might have made a more obvious film script... which proves there are no hard rules to writing books or making films! I later bought the DVD with the director’s cut, where Oliver Stone explains his decisions for using the flashback structure, and re-cuts his own film to make it even better.

This is what Jaguar Jedi has to say about making the trailer:

I'm a big history lover and so this was super fun to do. But - it was difficult to pull off the history aspect as well as tell the story through a 3+ min video. Most trailers tend to be all heavy and dramatic, but I wanted to stick to the style of the book (and Bucephalus) and make it adventurous, spirited, and bouyantly rousing. After all, the book is from the view of a proud warhorse! It was very important to keep that invigorating spirit.

It was tough to cast certain people. For example, my brother and I felt that the Queen of the Amazons should be dark-skinned. However, I couldn't think of anyone fitting the "warrior queen", so at last I used Keira Knightley as Guinevere in "King Arthur". Ironically, we both agreed that we'd love Alun Armstrong as the Horsemaster, and that footage was from "Little Dorrit". If you've read the book you may remember the dog that adopted herself into the groom's camp, Perita. The German Shepard from "Gladiator" plays her.

But hardest of all was the main female, Charmeia. I could literally not think of anyone to play her. Not being able to think of anyone held me off this video for a year. Then, somehow, I came up with the idea of "One Night with the King", having seen it in theaters years ago. For young Charmeia (training and exercising Bucephalus for Alexander) I used the character Sharbat from "Zafir". (Who also dresses up as a boy, incidentally.) The footage for Tydeos, Charmeia's friend groom, is also from "One Night with the King".

And I guess the narrator dude is Old Ptolemy, LOL. The audio at the beginning is from "The Black Stallion".

Through editing I was able to make it look like there were scenes taken from a movie and put into a trailer in the latter half, while the first concentrates on Bucephalus' point of view. From Pella, Thebes, Granicus, Halicarnassus, Gaugemela, the Hindu Kush and India, there's such an epic vastness about the world that Alexander the Great conquered. I *really* wanted to show him cutting the Gordian Knot, with the thunder and lightening and Bucephalus rearing up, but LOL, there's only so much an editor can do.

And yes, Derek Jacobi is in there. Because I love him, and he's awesome.☺

I know the titles are not accurate Greek. It was the font I downloaded, and while it looks nice to non-Greek speakers, it's not real Greek at all. Also, as a Persian horse, Zoroaster would really be an Arabian, not an Iberian as shown. But the footage was too good to pass up... a white horse about to be captured

(For a full list of music and films used in this trailer and a copyright disclaimer, see Jaguar Jedi's comments on You Tube.)

So how do you follow that? Well, Katherine says she can’t until her US publisher produces the paperback so she can do a book giveaway (Muse: please, Scholastic, pleaaassse...) But she will put the complete Great Horse series of posts on her website so people can download them and read them in their proper order.

Meanwhile, the Muse has a cunning plan of his own! Now that you’ve met some of them, I think the other horses in Bucephalas’ herd should have a chance to tell their stories… and since these are not written yet, I am going to be challenging readers of this blog to help me tell them. See next post for details.

Katherine Langrish said…
This really is the most stunning tribute, Katherine, to a wonderful book. I've really enjoyed this series! Thank you so much!
3 November 2010 at 20:09

Alzrith said…
Whoah, a great trailer !! I can imagine what will be your books like if they turn into movies !! Once that happen, you can recommend me as one of the characters, minor or major ones !!
What a great trailer (oops, I said it again) !! Awh you're lucky, Ma'am !! Sooner and later I am the Great Horse will soon be made for movie !! I'd like to watch it !!
Thanks for the Great Horse series !!
9 November 2010 at 13:12