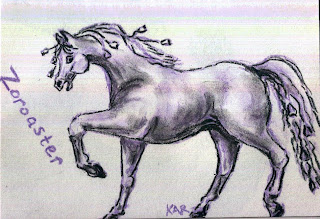 ZOROASTER
White gelding
Rider: none
I am the Sacred Horse of the Sun, named after the prophet Zoroaster, which makes me immortal – so this is going to be a happy story with no horses dying in it. I travelled with the Persian King Darius, until Alexander captured his camp after the battle of Issus. I survived in Bucephalas’ herd because I was gelding and not expected to fight. Then, a few hundred years after Alexander died, I carried a small white kitten out of Persia hidden in my mane (thank you, catdownunder!) and joined the Magi, who were following a star into the west.

Their camels were laden with gifts of gold, frankincense and myrrh for a newborn king, and they took me along as their fourth gift – a beautiful white horse for the young prince to ride when he was grown. I wore my finest tasselled cloth and a bridle of soft red leather, with silver bells plaited into my mane and tail, just like I was on parade. They make such a pretty tinkling when I trot.

Soon we came to a little town called Bethlehem, where the Magi led me into the stable for the night while they took rooms at the inn. (You might have heard there was no room, but gold opens doors the world over.) And – you’ll never believe it – right there in the stable, lying in my manger with the starlight all shining around him, was the very newborn king we had come to see! His parents didn’t have enough money for a room. So the Magi gave them the gold, frankincense and myrrh they had brought. Finally, they led me over in my red bridle with my silver bells, and said that the baby Jesus could ride me when he grew up since I was an immortal horse and would never grow old.

His mother Mary stroked my nose and said I was indeed very beautiful, but they already had a donkey and did not need a horse. His father Joseph laughed and said I was a horse fit for an Emperor, not a carpenter’s son. He said they didn’t have the room to keep me back in Nazareth... though I suspect he was thinking an immortal horse like me would soon eat them out of house and home. But they thanked the Magi for the gold, frankincense and myrhh – those would be very useful.

So the next morning the Magi took me back to Persia with them, trotting behind their camels. But, unknown to his parents, the baby Jesus did get a fourth gift that night. For when I lowered my head over his manger, the little white kitten had jumped out of my mane and curled up to sleep in the straw beside him. As far as I know, the family took the kitten back to Nazareth with them, where she no doubt made herself useful catching mice in the carpenter’s shop, while Jesus loved her as he loved all animals, until eventually she had some kittens of her own.

This is why you share your homes with cats today - and why later on, when he had become famous, Jesus rode into Jerusalem on a donkey rather than a white horse... though it is said that if you listen very carefully on Christmas Eve, you can hear the silver bells in my mane and tail tinkling faintly in the distance.

The Muse wishes all his blog readers a truly magical Christmas!