Muse Monday – the Faerie Spirit of Tuscany by Linda Strachan

June 06, 2011
My muse is an ethereal thing, a spirit of the faerie world I think, often only glimpsed out of the corner of my eye, a blend of whirring fragile wings with a flash of rainbow colours. 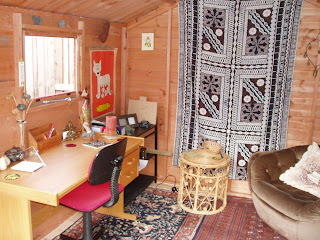 For the most part it lives in Tuscany – not that romantic place in Italy, much favoured by writers - but my rather more lowly writing shed, across the other side of my garden. It is a strange thing but my muse seems to have taken up residence there almost as soon as the shed was erected, as if it moved in with the furniture.

As with most spirits of the Faerie world it is often elusive and can be mischievous at times, leading me on, making me think I am doing fine and then disappearing when I need it most. But the atmosphere in Tuscany is such that I can normally summon it up after a short while and I am aware of its presence just behind my right shoulder, or perched on the edge of my chair.

It is a comforting presence, accompanied by a frisson of excitement for the work in progress.

On the occasional times when I have loaned out Tuscany to members of the family for a quiet study space, I have felt a sense of something missing and a desire to turf them out of that precious space where my muse and I work so well together.

The world outside Tuscany rarely intrudes when my muse is there, guarding that special atmosphere, where worlds of imagined people act out their lives for me as the words appear on the screen. 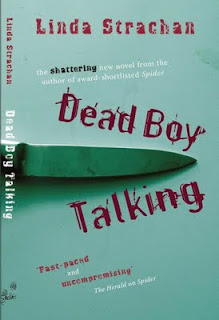 When I started writing Dead Boy Talking I had the title and the first line ‘In 25 minutes I will be dead’, but I had no real idea where it was going and who the characters were. I knew a boy had been stabbed and was all on his own – and that he had heard it took 25 minutes to bleed to death.

I took that out to Tuscany and started writing. It was a scary process because I was literally waiting for the story to unravel, to find out what it was all about, the whys and wherefore. For three weeks I worked solidly and my muse rarely left my side, until the first draft was completed. There were moments when I almost lost faith in it but the sense of that impish creature at my shoulder, urging me on, was all I needed to keep going.

My muse is bad and beautiful, wicked, impish and protective, and I wouldn’t be without it.

Thank you, Linda! Your shed looks like just the sort of place that would make a good unicorn stable...

You can find out more about Linda's books on her
website: www.lindastrachan.com
and her Bookwords blog www.writingthebookwords.blogspot.com

madwippitt said…
Wow! What a beautiful and peaceful looking place to write. Impressively tidy looking as well as serene! Do you do house calls? My writing area is as usual in complete mayhem ...
6 June 2011 at 09:35

Linda Strachan said…
Thanks, yes it is a lovely place to work and sorry, no house calls!
But this is the only desk I can keep clear because I only take out what I am currently working on and that seems to work!
6 June 2011 at 20:01