Tricks and Treats in Unicorn Wood 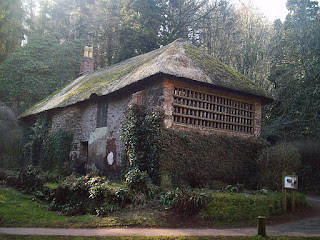 As Katherine’s muse, I naturally have a lot of influence over her work. This week I’d like to point my glittery horn towards her second novel Spellfall, which features a whole herd of unicorns as well as a haunted wood, an old lodge, a mysterious standing stone, an evil Spell Lord, and – since it's set at Halloween – plenty of tricks and treats!

This is the only one of Katherine’s books that starts in a supermarket car park in the rain, but strange things are happening the week before Halloween and it’s not long before our heroine Natalie is drawn into a sinister magical plot:

Natalie saw the first spell in the supermarket car park. It was floating in a puddle near the recycling bins, glimmering bronze and green in the October drizzle. At first she thought it was a leaf, but as she drew closer it began to look more like a crumpled sweet wrapper – a very interesting sweet wrapper. Pick me up, it seemed to say. Surely I’m worth a closer look?

Not everyone sees spells in supermarket car parks, of course, and Natalie is not just a normal girl. Her mother was a Spell Lady of Earthaven, which gives her the power to cross the boundary between worlds and makes her a target for the evil Lord Hawk, an exiled Spellmage who is planning to destroy the giant tree that is home to the spirit of Natalie’s dead mother. The magical gateways are barred to him. But at Halloween, between midnight and dawn, the boundary between worlds opens allowing creatures from both worlds to cross.

Here, Natalie and Lord Hawk’s son have fled into Earthaven and need some swift transport:

As soon as she saw the unicorns, Natalie realized her mistake. Horses with horns didn’t even come close. The herd was grazing on the riverbank upwind of the village. A thin mist drifted off the water, curling around their fetlocks. In the half light, their coats glimmered liquid silver. Their tails floated on the air as lightly as dandelion seeds, their manes were clouds, and their horns flashed rainbow haloes around their finely chiselled heads. Long-legged foals rippled among the adults, the tiny horn stubs on their foreheads still covered in silver fur. Natalie tried to count them, but it was impossible to focus on the creatures. As soon as she thought she had an animal fixed in one place, it would shimmer – and the next time she looked, it would be grazing on the far side of the herd.

Ahhh... I can remember when I was still a sweet little foal! Yet (much as I hate to admit it) this book is not all about spells and unicorns. When Lord Hawk kidnaps Natalie, her family and friends left behind in the real world are frantic with worry. Since her father is still drowning his sorrows in drink, it is up to Natalie’s best friend Jo and sulky stepbrother Tim to rescue her. They enlist the help of the Death Head gang by daring them to go trick-and-treating, but what will they find when they venture into Unicorn Wood at Halloween?