November 20, 2011
Today the unicorn welcomes author Pauline Fisk, who tells us how she came to write her Smarties Prize winning novel MIDNIGHT BLUE, now relaunched just in time for Christmas as an e-book for Kindle... over to you, Pauline!


The house stood on the hilltop above my village. In the morning when the sun came up, its windows turned to gold and you could see them shining for miles around. When I first knew it, the house was lived in. But even after its tenants moved out, the farmer who owned it insisting on not replacing them, leaving it to fall down, I always reckoned it was the best house in the county. It wasn’t just its stooping old beams and quarry-tiled floors that made it special, or its inglenook fireplaces and jumble of never-ending rooms, corridors and staircases. It was the view. 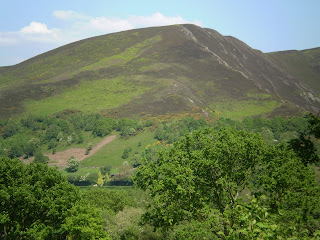 Hampton Haze stood above Rea Valley, with the hills of Shropshire in front of it - including the rocky Stiperstones - and Wales at its back door. It caught all weathers, which was why, left to its own devices, it so easily fell into disrepair. But built on the sunrise flanks of the Long Mountain, it also caught all the good views. In the morning, more likely than not, you’d find the valley full of mist but Hampton Haze alive with sunlight, an island in a sea of white. And there’d be sunrises to die for, the sky turned orange and magenta in zebra stripes. The house stood so high above the valley that planes and helicopters would fly beneath it, and there would be days when you could see so far that you’d have been forgiven for thinking you were flying yourself.


In my novel, ‘Midnight Blue’, Hampton Haze became Highholly House - the magical place beyond the sky to which my heroine, Bonnie, escaped the drabness of her city life and the domination of the cruel Grandbag. But it wasn’t only the features I’ve just described that inspired me write it into the book. There was something else - a quality to Hampton Haze that went beyond words. Once you’d found it, Hampton Haze was a place you’d never forget:
‘Mum said this wasn’t a place like anywhere else I’d been,’ Bonnie said. ‘She was right, but I’m still not sure that I know what kind of place it is.’
‘I don’t think any of us know what kind of place this is,’ Dad said. ‘Sometimes it seems just like anywhere. Sometimes it’s quite, quite different from the rest of the world.’
I can write all this with confidence, because I’ve lived in Hampton Haze. One unforgettable autumn when the builders moved into my own house in the valley, my family and I moved into what, for many years now, had been an empty farmhouse quietly falling down. We swept away cobwebs, attempted first aid on draughts, roof tiles and cracks in masonry, filled the bedrooms with children and the corridors with laughter, lit the Aga, set the pipes clattering and hissing and brought the tumbledown old farmhouse back to life.
This may sound idyllic, but it wasn’t all the time. One of the least attractive aspects of living at Hampton Haze was that the older children had to walk down a long, muddy, rutted track to pick up their school lift in the valley, and return the same way at night. And on playgroup days I had to do the same with a toddler at my side and a baby on my back.
Here’s Arabella, on that subject, Bonnie’s newfound friend in ‘Midnight Blue’, trying to explain why she’s taught at home instead of school: 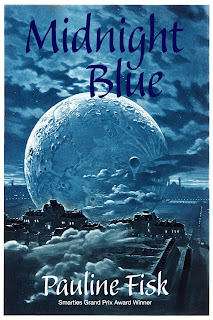 ‘Look. You can see why.’ Arabella pointed out the long snake of a track that started at the farm hate and wound its way down between the fields and hedges towards a distant cluster of roofs and a church spire. ‘It’s terribly steep,’ she said. ‘And so long. It goes down into the Dingle. Do you see? It’s very rough down there. And then it goes over Hope Brook, up the other side and all the way down there.’
Above them a skylark sang. ‘This is the quietest place I’ve ever been,’ Bonnie said. ‘I’ve never been on a farm before. I’ve never been anywhere so… empty.’
'Sometimes you can hear the hill humming,’ Arabella said, ‘if you listen carefully.’
Hampton Haze might have been a challenge, but it was a joy as well. Some days smoke blew down the chimneys forcing us to open all the windows. And there was no central heating, which meant we sometimes nearly froze. And rain insisted on coming through the roof, no matter how we tried to stop it. But the house was like a singer with a special song, sometimes hummed, sometimes crooned, sometimes belted out. It had been empty all that time, and now it had an audience and it was happy to be alive. And whatever the weather, whatever our mood, however many challenges we had to face, we couldn’t help but sing along.

But not for ever, I’m afraid. When the builders finished working on our own house, Hampton Haze fell silent as if it knew what was coming next. We packed up and left, then it was empty again. Every morning I’d look up at its golden windows from our house in the village and feel its reproof. It had given us everything, and we’d abandoned it like a lover who was of no more use.

Perhaps that’s why I wrote it into ‘Midnight Blue’. Perhaps I did it out of guilt. Or perhaps, seeing it still standing empty a couple of years later, I wanted to give it something to sing about again.

I’ve been writing about places all my life. A sense of place has always been my means of working my way into stories. It’s the hook which always draws me in. In my childhood I remember my mother taking my brother and I on picnics along the River Thames, passing houseboats on the water, and houses with long, grand gardens with half-hidden swimming pools. I’d return home and start writing about them, my imagination fired by what it must be like to be a child growing up on a boat, or in a house with mullioned windows and a swimming pool. And when I came to write ‘Midnight Blue’, I found myself doing the same with Hampton Haze. What was it like to be Arabella, growing up on a lonely hill, with little contact with the outside world? And what was it like to be Bonnie, carried through the sky to Highholly Hill by a magic, smoke-filled hot air balloon?

There was another hill once, and another ruined house, from which I date my interest not only in lonely hilltops but the mysterious subject of balloon flight. I was a city girl who had gone to get away from it all in a tiny cottage overlooking Worcestershire’s Teme Valley. Much of what Bonnie felt about her strange new world I felt about this place. No road ran within at least a mile of my cottage, and nobody had lived in it for many years. It was a two-up-two-down, with a pig pen out the back, water up the field in a tap next to a cattle trough and no electricity, which meant I cooked on an old range fuelled by logs collected from a nearby wood.  My days were ruled by the sun. When it rose I did as well; when it went down it was time for bed. But that was fine by me because I wasn’t there for domestic ease, I was there to write. Every day I’d sit out in the damson orchard in front of my cobbled-together, packing-case desk and clatter away happily on my aged Adler typewriter. I never saw another soul, except for my husband who was there to paint, and the only transport I ever saw was a tractor on a distant field and a hot air balloon which one day flew overhead.

For years I thought about that hot air balloon. To begin with I wrote it into a story about sky-gypsies in painted balloons, but slowly that idea petered out [though not for good, I’d like to think] and a new one came in its place. In between while, I moved to Shropshire, had my family and spent that autumn up at Hampton Haze.

Now that little cottage where it all began isn’t so little any more. An extension has been built, completely dwarfing the original four rooms, and there’s even a track to it instead of an empty hilltop interrupted only by fields and woods. And Hampton Haze has changed as well. What once was a track is now a private road without a single ridge in sight. And Hampton Haze never did fall down. I thought it would and we’d be its last inhabitants after hundreds of years. But it was bought instead, and became what it was always meant to be – somebody’s home.

‘They began to climb. As the track wound and the hedges bowed beneath the weight of snow, Bonnie caught glimpses of Highholly House below the brow of the hill, with a light in a window that beckoned to her like an advent star. Her legs began to ache. She pulled them out of the deep snow, one after another. There was a wonderful stillness everywhere. They both climbed quietly. The only sound was the crunch of their feet.
‘Look at it,’ said Michael. The sky was that magic midnight blue again. The moon was up and shining on the snow. There was a glittering, pale-blue sheen over everything. ‘It’s special, isn’t it? Do you know what I mean?’

It sounds a very special place, Pauline! Just the kind of place a unicorn would love.
You can find out more about Midnight Blue on Pauline's blog tour:

Anonymous said…
I just awarded you the Liebster blog award, Kath - check it on my blog http://jenalexanderbooks.wordpress.com/
20 November 2011 at 11:08

Katherine Langrish said…
A magic post for a magic place - by a magical writer. Loooking forward to welcoming you to my blog soon, Pauline!
21 November 2011 at 14:21

Anonymous said…
Just wanted to share an image I found on Pauline's Facebook page. It's an image of the valley bellow the house hidden under a blanket of mist on Millennium Morning. Enjoy