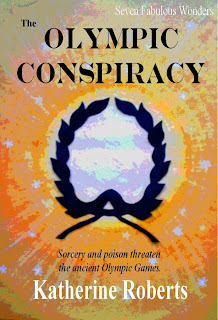 To celebrate the 2012 Olympic Games coming to London and help get you in the mood if you're sitting in a traffic jam on your way to the stadium, I am offering my Seven Fabulous Wonders ebook title The Olympic Conspiracy free (yes, you heard the unicorn right, absolutely FREE!) for five days from today until 31st July.

This book is set during the 113th festival of the ancient Olympic Games, where the original torch relay took place around the altars of the temples in the sacred precinct at Olympia, finishing at the Temple of Zeus which housed the famous Statue of Zeus - one of the Seven Wonders of the Ancient World:


Here’s the timetable for the 113th Games from The Olympic Conspiracy:

If you enjoy your free copy of The Olympic Conspiracy, you can now get all the Seven Fabulous Wonders titles in this omnibus ebook edition for the price of a single paperback: 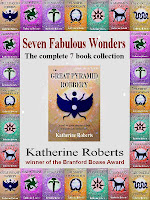 madwippitt said…
A contest for heralds and trumpeters? Is this where the idea of blowing your own trumpet comes from?
I like the idea - it would be fun to have this in the modern Olympics - but ban vuvuzuelas ...
27 July 2012 at 12:14

Katherine Roberts said…
I don't know where that saying comes from - but now you've got me curious, so the unicorn is going to try to find out. (He's been blowing his all day on Twitter, so he should be an expert by now!)
27 July 2012 at 18:06