February 06, 2013
The third book of the Pendragon Legacy series features a magical crown, which a dragon stole from King Arthur as he lay dying after his final battle with Mordred. This Crown of Dreams contains powerful jewels that store the secrets of the Pendragons, including the ancient skill of dragon riding. 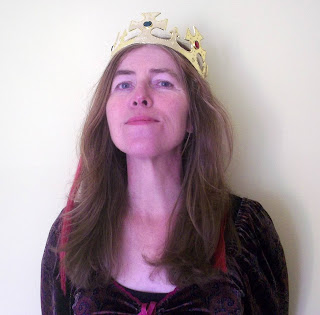 (She looks a bit fed up, because it's not working yet!)

Of course, her crown is just plastic so that's probably why no dragon has come to answer her call (which is just as well, since I don't fancy sharing my blog with a dragon!). Or maybe it's the wrong sort of crown...

To find out what kind of crown the real King Arthur would have worn, see Katherine's post over on the History Girls blog today.