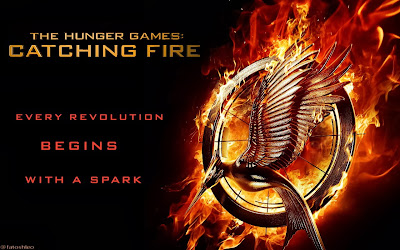 Ever since I downloaded the free sample chapters on my Kindle, I’ve been a fan of the Hunger Games by Suzanne Collins. The sample grabbed me by the throat, so even though I am about 35 years older than the target readership I ordered all three paperbacks and read them back to back. I saw the first Hunger Games film last year shortly after reading the book, and while I enjoyed it, I remember a bit of a flat feeling afterwards because the book (of course) is better than the film almost every time... or maybe I just remembered the plot too well so there were no surprises?

Now, a year later, I’ve just seen the second film Catching Fire – and I'm happy to say yes, it delivers! Obviously having a year between reading the book and watching the film helps, because although I had a vague memory of the plot, it was not enough to mean I spent my two and a half hours in the cinema comparing the screen version with the book. Also, I think the second story is more powerful.

Katniss Everdeen, the heroine of the Hunger Games, has become a symbol to the hungry people who live in the outlying Districts that service the Capitol… for which read people living and working in the small towns of any large Western economy whose capital sucks the resources out of the entire country. (OK so maybe we are not quite in Hunger Games territory yet, but the parallels in these books are obvious, and I am sure it is no accident that the set pieces complete with their horse-drawn chariots are reminiscent of Rome at the height of its Empire, i.e. just before its fall.) Katniss has also learned to act. Some of the emotional scenes are quite harrowing, and the mind-games the Capitol plays with its victors makes Katniss’ terror of the Arena disturbing to watch particularly in the early part of the film.

On their Victory Tour (which is a carefully-orchestrated public relations exercise - reminding me a bit of an author's tour on publication of a new book!), Katniss and Peeta are pampered and costumed so they can do their job of distracting people from their real hardships. But despite their best efforts to do this, the Tour deteriorates into flare-ups of rebellion in the Districts that result in executions and floggings, including a graphic scene where Katniss’ hometown love Gale is dragged into the market place and whipped half to death for trying to stop a stormtrooper from beating an old woman. (I'm calling the so-called peace keepers that, since in their white armour they reminded me of the Empire’s storm-troopers in "Star Wars” - another rebellion story.)

Increasingly terrified of revolution, President Snow orders a special Hunger Games – a “Quarter Quell” – where the tributes are to be drawn from the victors of previous Games. This means Katniss, as the only surviving female victor from District 12, must return to the Arena - a place that gives her nightmares. The male tribute accompanying her will either be her fellow victor and screen-love Peeta, or their drunken mentor Haymitch. Of course it turns out to be Peeta, who volunteers when Haymitch’s name is picked so that he can protect Katniss in the Arena.

So far so Hunger Games. But things are different now. This Game is not just for the entertainment of the masses (if any game where teenagers are expected to kill one another for sport can be considered entertainment – see my post over at the History Girls.) The Quarter Quell Games are still deadly serious in the Arena, where President Snow and his minions try their hardest to discredit Katniss as well as killing her in as nasty a way as possible – but it is even more serious outside of it, where Katniss’ and Peeta’s families are held to ransom in a final effort to squash the brewing rebellion before it can get out of hand.

I won’t spoil the story for those who have not read the book, but the film ends on a cliff hanger just like the book… with the result that Catching Fire did not feel properly finished to me. The first Hunger Games film had a satisfactory ending, but in this case I found myself wanting to watch the third film right afterwards – which is probably the whole idea, but cruel to unicorns! Though, of course, if you are really fired up at the end, you can always re-read the third book Mockingjay while you're waiting.


In Catching Fire, “May the odds be always in your favour.” is replaced by “The odds are NEVER in our favour.” That is dangerous stuff for anyone’s subconscious to chew over, so I just hope the third film is not too long in coming!

Have you seen this film yet? What did you think?

(Images copyright: fair use for purpose of review.)

Dan O. said…
Good review Katherine. The first still seems a little bit better in my mind, but nonetheless, the story continues to move and get more tense.
22 November 2013 at 22:05

Unknown said…
This comment has been removed by a blog administrator.
8 December 2013 at 10:42