Today the unicorn welcomes author Ann Turnbull to tell you about her wonderful muse!

Ann: My muse is a small ceramic figure of a woman with a bird on her head. She was made in Cornwall by Shelagh Spear. As soon as I saw this figure I knew she was a goddess and would be my muse. You can see her in the photo, surrounded by the clutter on my desk (she doesn’t really have quite such a short lower body – that’s the camera angle). Unfortunately she is rather easily knocked over and her bird has lost its beak. I hope this doesn’t affect her powers.


When did you first meet?
Ann: A few years ago. My sister gave her to me as a birthday present.

Does your muse appear in any of your books and/or artwork?
Ann: I think she may be one of the many goddesses and nymphs who appear in my Greek Myths. And she could well have a role in a new YA novel I’m thinking about at the moment – but that’s a secret!

If you won the lottery and had complete artistic freedom, what would you write/create?

Ann: Probably much the same as now, but I’d take longer over it and do more thinking and research. Whether that would make it better is anyone’s guess.

Before you go, does your muse have a message for the Unicorn?

Be wary of prowling cats and clumsy authors or you might lose the tip of your horn.


Oh yes, I have tripped over the cat a few times already! And once she fell asleep on the stairs, and I trod on her and we both fell down them... though fortunately my horn didn't break, so I still feed her. 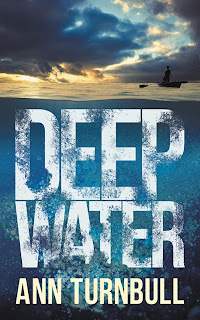 Jon should never have skipped school with his friend Ryan - never have taken that boat. Now Ryan is in danger - and only Jon can save him. But Jon is scared. The police are knocking on his door. They know he's lying. Is it too late to tell the truth?

A short, fast-paced thriller for children aged around 9-14.

This new edition of Deep Water was published in October 2013 by SilverWood Books and is available in paperback from Amazon and selected bookstores.

Find out more about Ann and her books at www.annturnbull.com