January 28, 2016
The PLR (Public Lending Right) statements are just in, and for the second year running Book 1 of my Pendragon Legacy quartet Sword of Light sweeps the board for loans in both the UK and Ireland. If all my books loaned as well as Sword of Light, I would be a happy author! 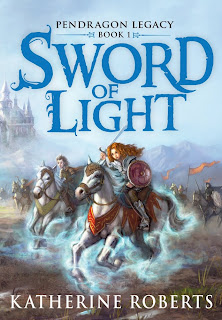 Sword of Light obviously benefited from being included in the Summer Reading Challenge when it was first published, and my theory is that there are more copies of this book in libraries all over the country than there are of my other books. Good news for the author, since each time someone borrows one of my books from a participating UK library (i.e. not the new volunteer libraries), I am paid 7.67 pence by the government as a sort of compensation for that reader not buying a copy of the book and earning me its royalty via my publisher. The rate in Ireland is just over 4 cents, and there is a cap for mega-popular authors, so we're not talking riches here - but every penny counts and the PLR payment usually arrives in my bank just in time to pay my annual Society of Authors subscription and website/domain renewals, meaning I can call myself a proper author for another year.

It might seem obvious that my latest series should perform best, and sure enough the other three books in the Pendragon Legacy quartet Crown of Dreams, Grail of Stars and Lance of Truth are not far behind. But some older books published more than 10 years ago still loan quite well, despite these older copies (I imagine) slowly falling to bits and being cleared out of libraries to make way for newer titles. Publishers who produce robust paperbacks or library-friendly hardcover editions are doing themselves and their authors a favour, since those books are likely to remain in libraries for longer, keeping them in front of readers for many years after they have gone out of print and vanished from the shops.

Books that are reprinted or produced in more than one edition obviously have an advantage, as in my Branford Boase Award winning title Song Quest, published originally in hardcover by Element (1999), then in paperback by Chicken House (2001), and later in a new paperback edition by Catnip (2012). Song Quest makes it into 7th spot overall, with loans being spread across all editions.


My personal favourite I am the Great Horse (published in 2007) was physically challenged in paperback because of its great length (the UK publisher originally wanted to do a more robust hardcover like the US edition, but UK booksellers would not support that format at the time).  It loaned quite well last year, but has clearly vanished from some libraries in the meantime and only makes 12th spot in the UK, although happily I am the Great Horse has held its position in Ireland, where it comes in 3rd. Perhaps horses are simply more popular in Ireland than they are over here?


Here are my top ten popular titles in libraries (based on UK and Irish loans):

What was the last book you borrowed from a library?