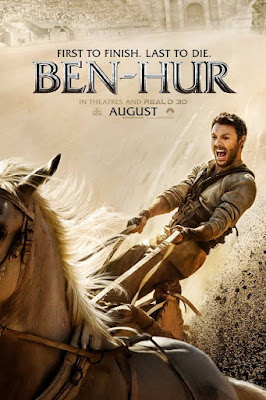 I've written a book about Roman chariot racing already - The Cleopatra Curse (Book 7 of my Seven Fabulous Wonders series originally published by HarperCollins), in which lighthouse boy Zeuxis becomes a charioteer and races a chariot in Alexandria's hippodrome to win his freedom during the riots of Queen Cleopatra's reign. It was a very exciting book to write, and I always knew I'd do another chariot racing book some day. 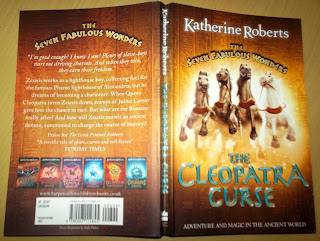 I'm in the early stages of a new project about a Roman racehorse, so in the interests of research I took myself off to see the brand new make of the classic Roman epic Ben Hur. I've seen the 1959 version starring Charlton Heston on TV, but remembered little of the plot apart from the infamous chariot race that apparently killed some horses during filming and the vaguely religious theme - inevitable since the plot takes place in 33AD against a backdrop of the crucifixion of Jesus of Nazareth.

The new version of the film certainly has a fantastic chariot race... and all the racing scenes are so realistic, I can't believe they didn't kill at least ten horses during filming this one! I loved the horses, even if some of the non-race scenes seemed rather romanticised, such as when the shipwrecked Ben Hur heals the beautiful white mare belonging to the rich Arab prince who recruits him to drive his chariot in the circus. Judah Ben Hur's story of how he goes from rich Judaen prince with strong Roman connections to criminal and Roman galley slave, and then finally a charioteer in Jerusalem's new circus racing against his former Roman 'brother' Messala (now a respected tribune driving chariots for the glory of Caesar), remained the strongest and most exciting plot thread for me.

There's also a romance angle (no scenes of sexual nature) with Ben Hur's sweetheart the slave girl Esther, who becomes one of Jesus' followers. Other women in the plot include his sister and charismatic mother (played by Ayelet Zurer - she deserved a bigger part!), who were arrested at the same time as him and whom he believes dead. He certainly has reason to hate the Romans for what they have done to him and his family, and turns that hatred on his former adopted brother, who was put in an impossible position by his Roman commanders when Ben Hur refused to betray his zealot 'friends' (actually a wounded boy taken in by the prince in an act of mercy), which is part of what makes the final chariot racing scene so strong. 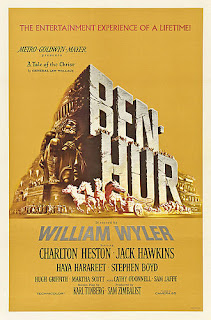 The religious part of the plot works less well, I think. It isn't overdone by any means, but - in faithful reworking of the 1959 film, maybe - Jesus makes several appearances in the film and the theme of forgiveness and loving thy neighbour does not sit easily with the chariot racing action plot. That might be the whole point, of course - but to my mind it's confusing, and after the amazing ending to the race it dampens things a bit to see Jesus crucified, even with all the miracles happening at the time. The forgiveness theme does, however, work well with the story of the two 'brothers' - Ben Hur and Messala - who start out life as boys racing their horses in the desert for fun and end up trying to kill each other (literally) in the circus. I'm still thinking about it, but my feeling is that the Jesus of Nazareth story is so well known, much of it could have been left to happen off-scene and that might have made the central story of the brothers and the chariot race even stronger. The opening scene is straight in there with the horses and the boys, and should - I think - have been there at the end, too, rather than the crucifixion... this is how an author's mind works when she watches a great film!

Oh yes, Ben Hur has a certificate of 12A in the UK, but is this really a children's film? No sex, maybe, but Violence with a capital V! There are some scenes that were so graphic I can still shut my eyes and see them... the first horse racing accident, the body of a nameless character being dragged out of the Roman galley up the steps so Ben Hur can go down to replace him, Messala's short but realistic battle scenes, the casualties in the final chariot race... to say nothing of the many crucifixions. The Hunger Games (which is obviously based on the whole Roman games thing) has nothing on this!

My new book? Ah well, that is another story entirely and it's not finished yet so I'm afraid you'll need to be patient... very patient, since I am going to send this one around some real publishers when it's ready to share, but you can expect a Roman version of I am the Great Horse...

I am NOT a Roman racehorse!