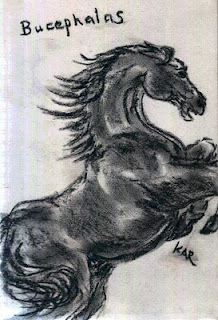 Bucephalas, Alexander the Great's war horse ( original artwork by Katherine Roberts ) Proving that old warhorses (like old books) never really die, my 2006 novel about Alexander the Great from the horse's mouth I am the Great Horse is included in the British Library's exhibition Alexander the Great: the Making of a Myth , which runs from 21st October 2022 until 19th February 2023. I am the Great Horse (Chicken House edition, 2007) Alexander tamed Bucephalas when he was just 10 years old, and rode him in all his major battles until their final battle in India against Prince Porus and his war elephants. Theirs was an incredible journey, from Alexander's home of Macedonia across ancient Persia to the edge of the known world, beautifully illustrated for my book by artist Brian Sanders. Alexander and Bucephalas' journey (map copyright Brian Sanders) This novel has had quite a journey of its own since its original publication by Scholastic US (hardcover 2006) and Chicken
Read more
More posts